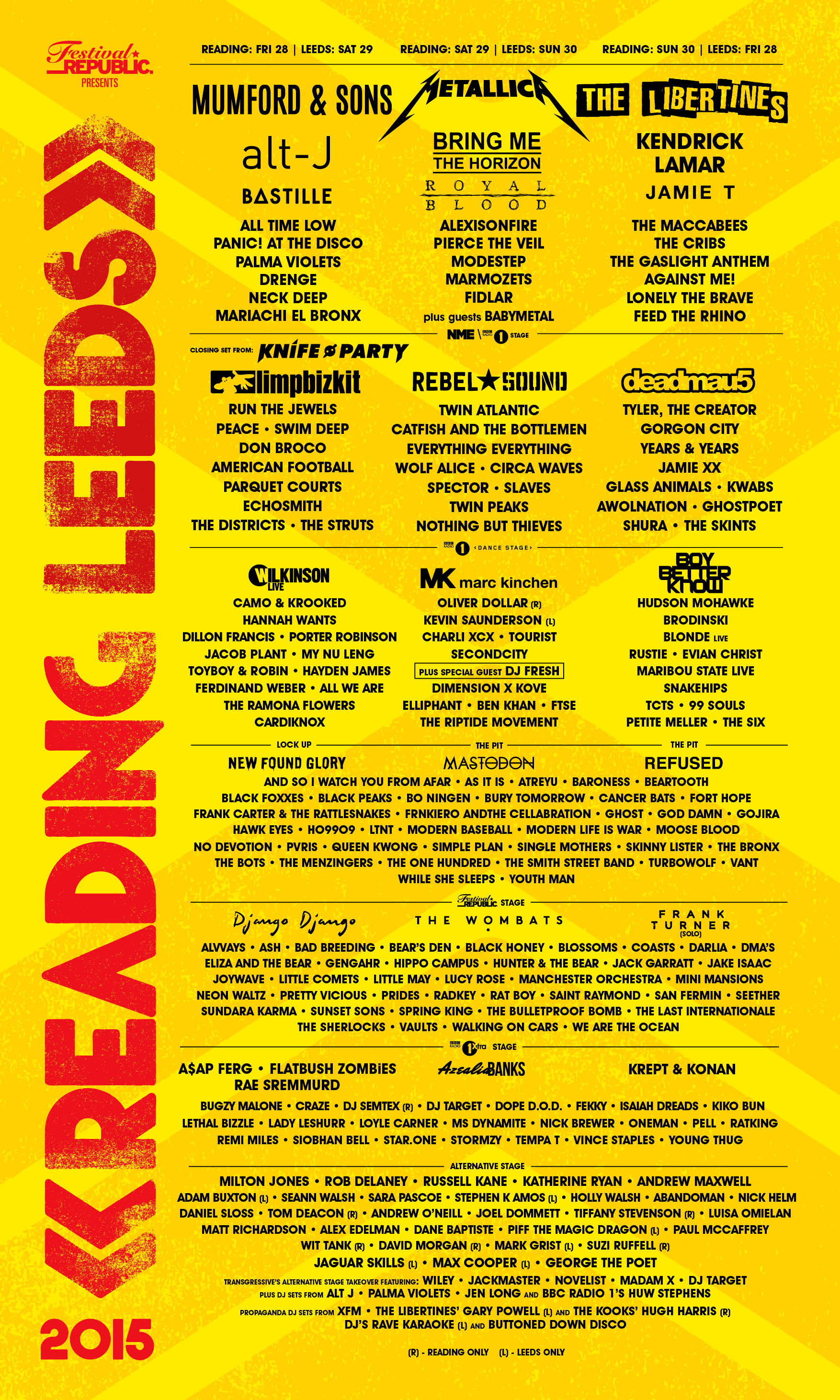 The sixteenth edition of Leeds Festival returned to the grounds of Bramham Park with the world’s most incredible line up of music.

With the festival already packed full of people ready to start the party early, Thursday kicked off with some very special performances over on the Alternative and Dance to the Radio stages. Dance to the Radio once again brought along some friends to play, providing the festival with the first homecoming show of the festival in the form of Pulled Apart By Horses. The Alternative Stage featured comedy from Adam Buxton picking apart the best and worst of the internet, followed by some sterling performances under the UV lights as members of the crowd took to the stage for Rave Karaoke. DJ sets from Jaguar Skills closed the stage, while Bondax headlined the Relentless Stage to end the first evening in the spectacular woodlands.

The air of excitement was in full swing as Friday raised its head, with The Libertines making their triumphant return to the festival – the first in the headline spot. Before them, the Main Stage was filled with acts drawing the huge crowds. The Cribs felt as home as ever at Leeds, while Maccabees and Jamie T received both received rapturous welcomes after long absences. They were followed by one of the most hotly-anticipated debuts in the history of the festival, as Kendrick Lamar produced a powerful set that drew from both of his critically-acclaimed albums.

Boy Better Know ended a day that showed that UK Grime was truly on the map in 2015. Earlier on acts like Fekky, Stormzy, and Krept & Konan drew crowds that filled the BBC Radio 1Xtra Stage to capacity, but it was the BBK crew that really cemented the genre’s status. With people dancing even outside of the tent, the finale of Skepta’s ‘Shutdown’ will surely go down as one of the biggest grime moments of the year. DeadMau5’s headline spot on the NME/BBC Radio 1 Stage saw him produce perhaps the most visually spectacular sets of the year, and it wasn’t long until Leeds fans got to see him again, with a surprise set at the Relentless Stage as part of his label’s Mau5trap Takeover.

As the sun shone on a glorious Saturday, the crowds were out in full from the very start as Mariachi El Bronx brought a taste of Mexico to the Main Stage – the band would later play a wholly different kind of set in The Lock Up as The Bronx. Eliza and the Bear can now add a packed out Leeds show to their growing accomplishments, as they played songs from their upcoming debut album at the Festival Republic Stage. Don Broco showed just how far they’ve come from their 2011 debut performance on the BBC Introducing Stage, marking their fifth appearance in a row.

Panic! At The Disco drew huge crowds as the ever-charismatic Brendon Urie swaggered his way through their back catalogue, capping it all off with a thousands-strong sing-along of Queen’s ‘Bohemian Rhapsody’. The crowds didn’t budge as All Time Low, Bastille and alt-J all played career-defining sets. Mumford & Sons closed the Main Stage’s Saturday in exemplary style with a set that showed the versatility of the band’s back catalogue, bouncy folk tracks effortlessly played side-by-side with rock anthems. It was a glorious return to the festival for the band who played the NME/BBC Radio Stage in 2010.

As the final day approached, the rock was out in force from the very start. The metal whirlwind that is Babymetal opened up the Main Stage with intense dance moves, a headbanging backing band, and a crowd full of converted fans – had they not already been swept up in Babymetal-mania already. The hard rock kept The Pit tent rumbling as bands like No Devotion, Pvris and Atreyu thrashed their way through the day. The Pit was headlined by the otherworldly Ghost, their demonic metal show mesmerising all who ended up the day with the Swedish band.

Liverpool-band Clean Cut Kid finished off a weekend of potential future headliners making their first appearances on the BBC Introducing Stage. The stage once again brought upcoming bands from across the country to play at the festival, with thousands of attendees finding their new favourite band. With bands like Catfish & The Bottlemen, Marmozets and Slaves making their debut performances on the stage, we expect some big things from the 2015 roster.

There could be no better finale for 2015 than Metallica. Playing tracks from their decades-long back catalogue, it was an explosive ending to the festival in the more ways than one. As the band launched ‘Enter Sandman’, fireworks lit up the Yorkshire sky and provided the perfect accompaniment to one of the hardest rocking songs of an age.

Thank you to everyone who came and made this one of the most incredible weekends Leeds Festival has ever seen… we’ll see you all again next year.