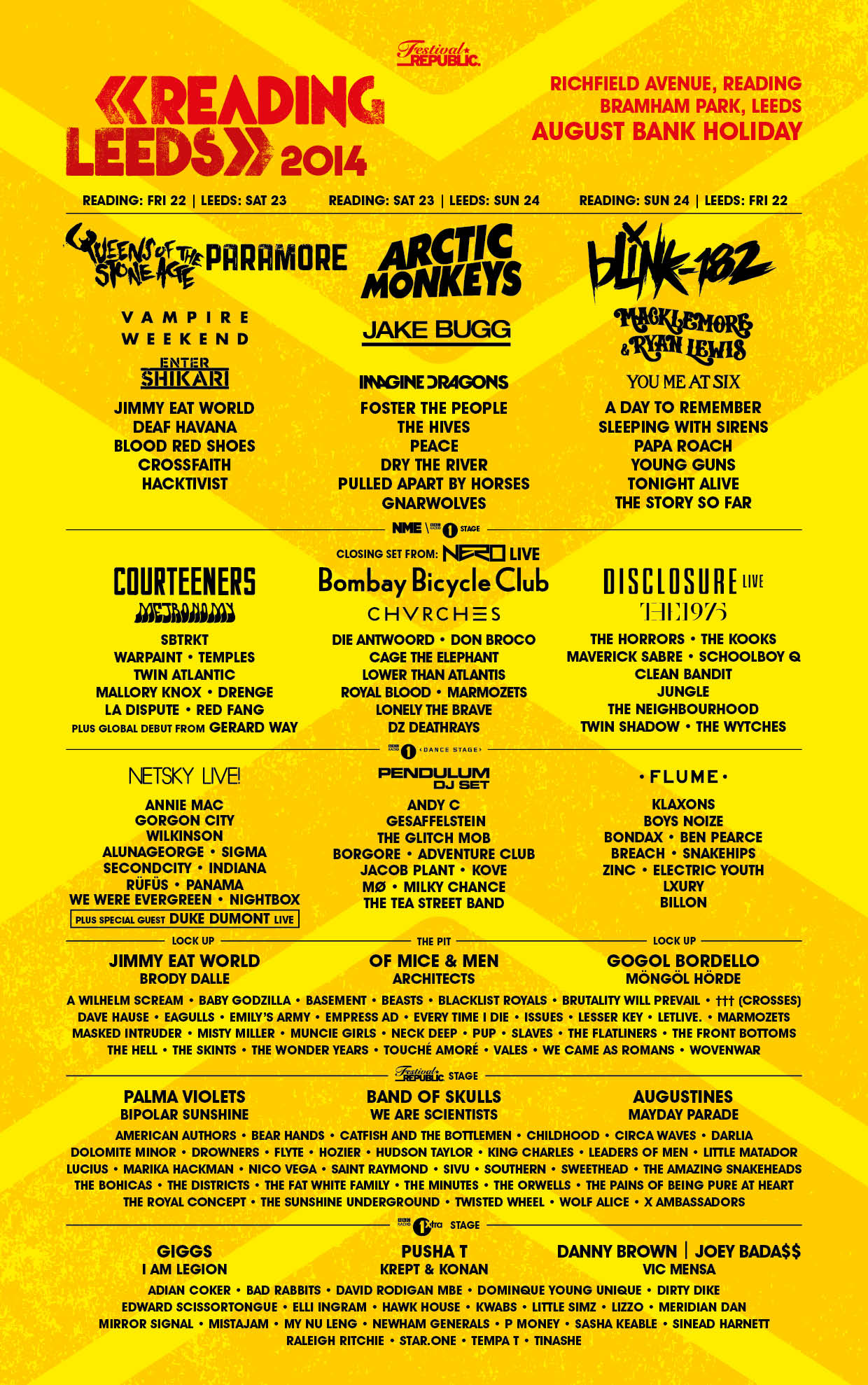 Leeds Festival got off to a phenomenal start with Friday headliners Blink-182 playing to a humongous crowd. Earlier on in the day A Day to Remember treated the crowd to new material and an energetic Para Roach took to the stage. Over on the Alternative Stage Simon Amstell attracted another massive audience, with the crowd spilling out of the tent.

Named as one of the biggest artists of the year, Jungle’s set was insane, and the crowd went crazy for single ‘Busy Earnin’. On the BBC Radio 1 Dance Stage, Bondax went all disco with their live disco-infused set. Meanwhile Clean Bandit got everybody dancing and singing along to ‘Extraordinary’. Klaxons pulled off an awesome set topped off by their fantastic light effects.

The excitement continued on day two of Leeds festival with the Main Stage bands flawless performances and addictive energy.

The crowd went mad for Enter Shikari, and Enter Shikari went mad for the crowd! Both the singer and guitarist ended up in the pit, doing a Superman slide on a speaker across the stage and playing a great mixture of new and classic tracks. The Main Stage fun didn’t stop there! Paramore made a fan’s dream come true by inviting a girl from the crowd to sing ‘Misery Business’ with Hayley. Queens of the Stone Age proved that they deserved the joint headline spot showing with ‘Lost Art of Keeping a Secret’, ‘Smooth Sailing’, ‘Little Sister’ and ‘Sick Sick Sick’ from their back catalogue.

Bill Bailey pulled a huge crowd to the Alternative Stage with his renditions of Miley Cyrus’s ‘Wrecking Ball’ in the style of Kraftwerk and a reggae version of the Downton Abbey theme tune. Chris Ramsey and Glenn Wool both provided great laughs as well.

Bringing the biggest crowd to the NME/Radio 1 Stage yet this weekend was Courteeners with their irresistible anthemic rock sound. Before them, Metronomy performed songs from their past albums and latest album, starting with ‘Holiday’ and getting sing-alongs to ‘Love Letters’ and ‘Heartbreaker’ among others. SBTRKT were joined onstage for ‘New Dorp New York’ by surprise guest Vampire Weekend frontman Ezra Koenig.

Starting her set with a cover of Montel Jordan’s ‘This Is How We Do It’, AlunaGeorge got the entire tent dancing and singing in a pop music frenzy. Over on The Lock Up Stage, Brody Dalle played a variety of her own songs and hits from her previous band The Distillers, pausing her set only to say to a fan “I love you too”.

On Sunday Alex Turner treated the Leeds Main Stage audience with some unusually chatty stage banter, and as always the band’s flawless sound had the crowd singing back the words to every song. Earlier on in the day The Hives riff fuelled set, rivalled by the bands confidence really sent the Swedish masters of rock ’n’ roll up in the ranks of one of the biggest highlights from the weekend. Following them Foster The People brought their indie-pop music to the stage, getting the fans bouncing to every song and chanting the choruses. Bombay Bicycle Club and Chvrches also brought huge crowds to the NME/Radio 1 Stage.

The Pit Stage made its festival debut since being renamed by festival-goers this year, pulling in rock and metal fans who kept the mosh pits there all day. Southern Californian metal-core quintet Of Mice & Men topped the bill, playing favourites from all three of their albums. Five piece Marmozets’ energetic mash of rock, punk and the intense vocal of singer Becca Macintyre has proved them to be one of the most exciting young bands out there.

Over at the Alternative Stage, Sara Pascoe, Terry Alderton and Reeps One got hugely responsive crowds. Returning to Leeds, Transgressive Soundsystem celebrated their 10th Anniversary as one of the country’s leading music label/events groups with incredible performances from Star Slinger and global R ‘n’ B superstar Kelis.

That only leaves one more thing to say about this weekend – thanks for coming!

See you all next year.