Foo Fighters, Twenty One Pilots, The 1975 and Post Malone are your Leeds Festival 2019 headliners!

Your summer is about to get a lot louder as we announce 20+ names to your Leeds Festival line up.

Wondering who you’re going to party hard to at next year’s Leeds Festival? We’ve got your first announcement right here and it’s guaranteed to put a smile on your face.

Making their triumphant return to the Main Stage, Foo Fighters will bring the noise with three-hours of huge riffs and deafening choruses. Fresh from their sold out shows at the London Stadium and Manchester’s Etihad, this is your chance to see one of the world’s biggest rock bands do what they do best… MELT YOUR FACE WITH THEIR HUGE HITS.

Getting psyched for next year yet? You will be soon. Grammy Award-winning Twenty One Pilots are your second headliner. Tyler and Josh are set to make a sensational appearance at Leeds fresh off the back of their worldwide Bandito tour. Don’t want to get ‘Stressed Out’ about seeing them? Make sure you grab your tickets now.

Making their Main Stage headline debut, The 1975 are going to bring ‘The Sound’ to Leeds Fest. Selling out shows across the world and releasing their critically acclaimed second album, ‘I like it when you sleep, for you are so beautiful yet so unaware of it’ and receiving a Mercury Prize nomination for ‘Album of the Year’ are just a few of the accolades the band have picked up recently.

They’ll be bringing their huge back-catalogue of hits to Leeds and songs from their new album, ‘A Brief Inquiry into Online Relationships’ due out this month, with a second part planned for next summer.

Feeling a little tired from all the excitement so far? Pull yourself together. Post Malone returns to headline Leeds Festival 2019 after the huge success of ‘beerbongs and bentleys’. Ready for a fun fact of the day? Posty is the first live act since Nirvana to go from an afternoon slot to the top of the bill on their sophomore album in consecutive years. Impress your family at the Christmas dinner table with that nugget of gold.

That’s not all though, Stockport’s Blossoms are back with a bang, following their recently released album, ‘Cool Like You’. Reading-natives The Amazons have been riding a huge wave of success and we’re pumped to welcome them back to next year’s festival. On the hunt for some goth-pop to perk yourself up? We’ve got The 1975’s label mates, Pale Waves providing the soundtrack.

Looking for some beats to get you moving? Award-winning dancehall crossover queen, Stefflon Don joins the bill on her journey to becoming a worldwide star. Stateside rapper Juice WRLD will be making his UK festival debut at next year’s Reading and Leeds Festival, storming the stage with his breakout hits, ‘All Girls Are The Same’ and ‘Lucid Dreams’.

They smashed it in 2017, Bastille return to storm the stage with hits from their two Number 1 albums and their huge current global smash, ‘Happier’. Reppin’ it for the North, YUNGBLUD returns to do what he does best; hyping up the crowds with his honest, emotionally driven performance.

All these acts and more join your 2019 line up, view the full poster so far below. 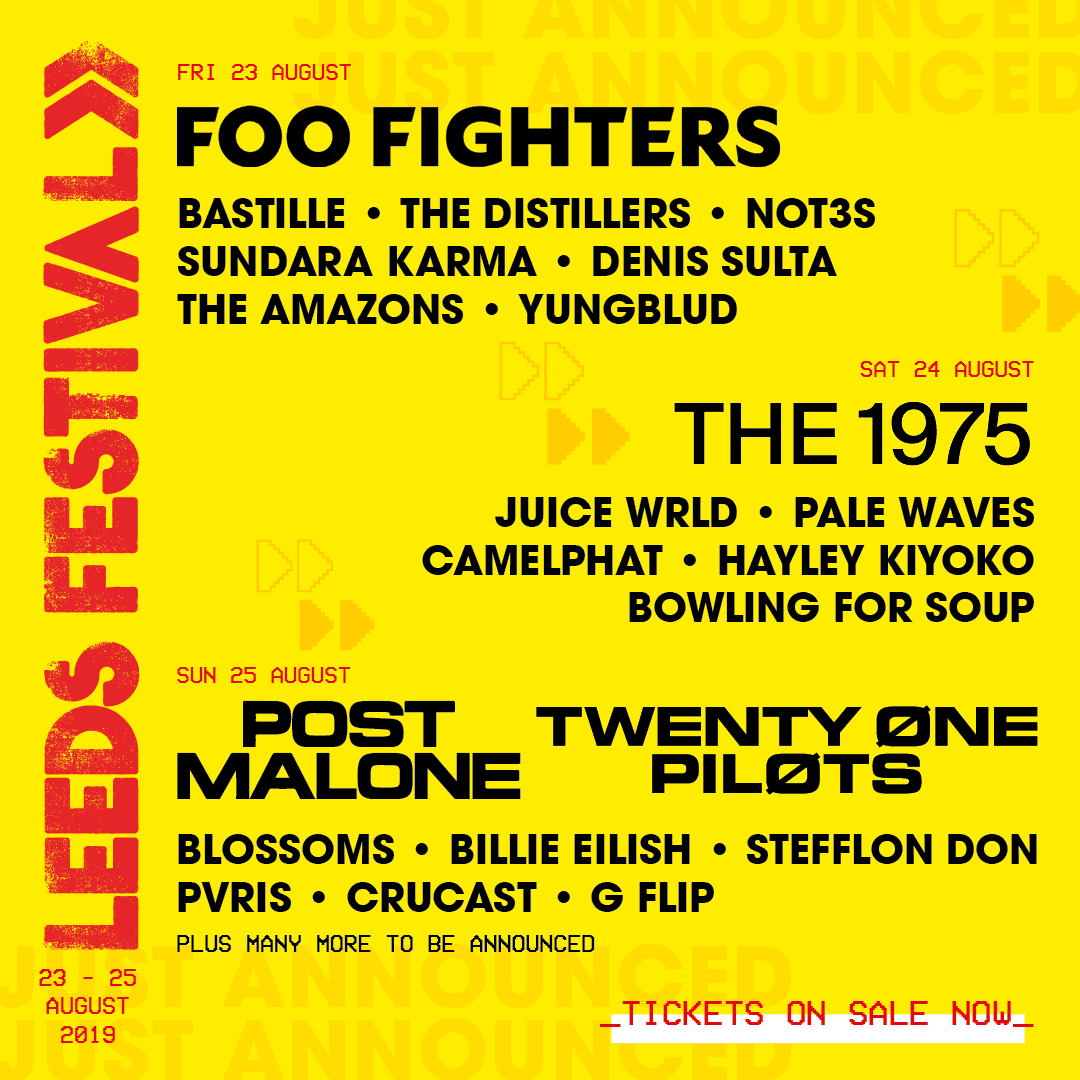 Does that sound like a bit of you? We thought so.

Tickets are on sale now!